Homes provide shelter and refuge, but they are also most Albertan homeowners’ single largest investment. Housing represents 47% of total assets for the average Alberta family – much higher than stock market investments and pension plans combined (29%). Why is this important? Because homeownership benefits the economy as a whole, as well as individual homeowners. Let’s look at this in the context of the most recent stats on Alberta’s real estate, reported by the Canadian Real Estate Association.

Investing in housing in Alberta is better than buying stocks

Over the last 18 years, house price appreciation in Alberta has outpaced Toronto stock market returns. Between 1999 and 2016, with average annual residential sales of roughly 57,000, house price growth in Alberta (6.6%) outpaced yearly returns on stocks traded on the Toronto Stock Exchange (6.4%).

Average residential prices up 3.1% in Alberta in January

Total residential sales across the province were up 17.7% year-over-year, totalling 2,679 resale transactions in January 2016. Roughly 3.4 out of every 10 newly listed homes were sold, translating into a sales-to-new listings ratio (SNLR) of 34%. And the average residential sales price rose 3.1%, to $383,040.

What’s so great about house prices being up? Rising house prices mean homeowners are building equity in their homes. Home equity represents the current market value of the house, minus any remaining mortgage payments. Equity is built over time as the homeowner pays off their mortgage and fluctuates with the market value.

Rising home equity benefits homeowners individually, and the Alberta economy as a whole. By how much? More than $40 billion in 2016. 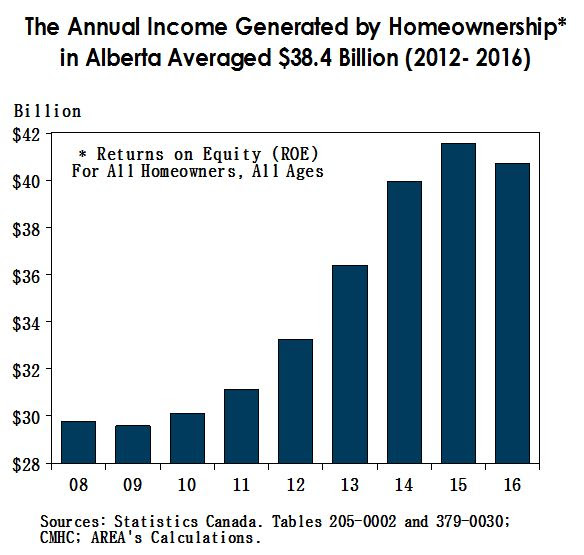 Using Statistics Canada’s data on Alberta homeowners’ mortgage balances (Surveys of Financial Security), we calculated equity shares by age group. Equity shares multiplied by user costs (average two-bedroom apartment rents used as proxy) provided the income generated (returns to equity) per homeowner, by age class. The annual income generated by homeownership was then derived by multiplying the number of homeowners by age group in Alberta with returns to equity per homeowner.

For those under 35, the income generated by homeownership reached $11,000 a year per homeowner

REALTOR® Tip: First-time buyers build equity in their home as they pay off their mortgage – roughly $11k a year!

Collectively, annual returns on equity (ROE) for all homeowners in Alberta reached roughly 38 billion dollars, or 12% of GDP

Thirty-eight billion dollars a year represents roughly 12% of Alberta’s nominal GDP and 85% of Government of Alberta’s annual revenues. When people build equity in their homes, they borrow against that equity through a home equity loan, or home equity line of credit. An increase in the value of their homes increases the amount of collateral available to households, leading to higher credit. Rising house prices, which imply higher housing equity, may encourage consumers to borrow more, causing a rise in consumer spending. Looking at the data, we know this to be true. 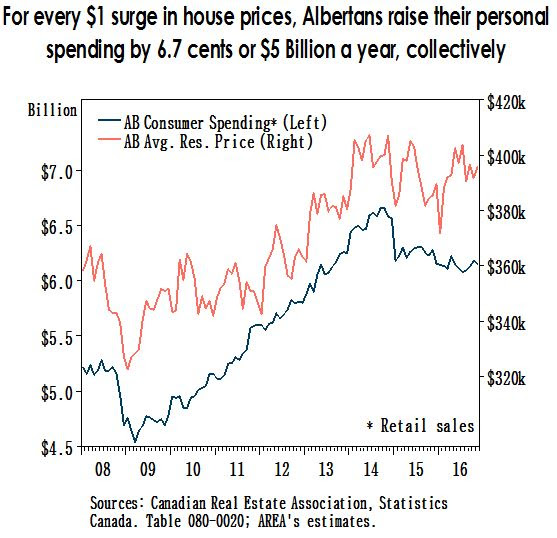 For every $1 rise in housing prices, Albertan homeowners raise their personal spending by 6.7 cents – collectively $5 billion a year

The increase in consumer spending following a rise in in house prices has been referred to as the marginal propensity to consume (MPC) from housing wealth. We found that, for every $1 increase in average residential prices, Albertans raise their personal spending by 6.7 cents, which collectively amounts to roughly $5 billion a year (2012-2016 average).

Five billion dollars a year is 1.5% of provincial GDP, and 11% of government revenues. This is a significant boost to Alberta’s economy. A 3.1% price gain, like the one we just saw in Alberta this January, equals an average increase of $11,420. The associated rise in consumer spending that could come out of that is $868 per homeowner per month, or $10,415 per homeowner per year, or a collective increase of $616 million a year.